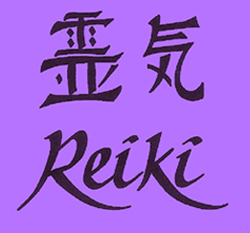 Reiki, which in Japanese translates as “Universal Life Energy”, is a “laying on of hands” healing technique.

Reiki was re-discovered in the early part of last century by Mikau Usui, who a seeker of knowledge and enlightenment.

Reiki works to balance and revitalize the body’s energy field. It has an holistic effect, touching the physical, emotional and spiritual components of the individual. It relieves stress and restores personal energy.

Reiki is simply a way of generating connection to the energy that makes up everything in our reality.  It is grounded in the idea that separateness is an illusion: we are all one thing in the universe.  Human beings are merely personified forms of that universal energy, and exist within its flow.

The energy of Reiki always works for the highest good of the client and the practitioner.  On a subconscious level, the receiver draws in only what is required. The energy has an innate wisdom and flows where it is required to remove blocks and restore balance.  It is a useful technique for general emotional stress because the energy acts as a powerful, silent counselor.  Since physical and emotional stress are often interdependent, it can also fortify the immune system.

In a Reiki session, the client is taken into a deep, meditative level of awareness, making this therapy a highly effective relaxation technique.  The client may feel a variety of sensations during a session including heat, cold, vibrations, tingling, static electricity, colours and sounds.

Reiki has developed a great reputation for promoting natural self-healing. It can speed up the time it takes colds, cuts, bruises and broken bones to heal.  It is also  beginning to receive recognition in mainstream medical science for its remarkable ability to facilitate and improve rehabilitation following major surgery.